Stefanos Tsitsipas played one of his best matches to easily beat Jannik Sinner 6-3, 6-4, 6-2.

In fact, Tsitsipas did not even face a breakpoint.

This is now his fourth career Grand Slam Semi Final as well. 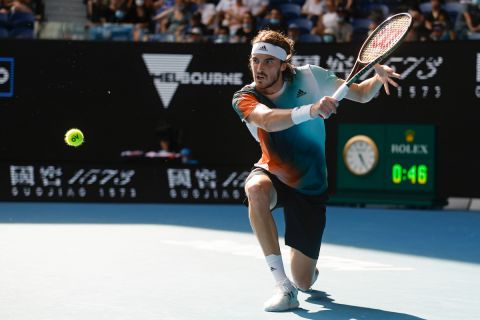 Tsitsipas comfortably took all three sets against Jannick Sinner as he seemed to have found his groove today, playing the best tennis of this tournament so far.

Sinner was not playing at all bad but Tsitsipas’ clinical performance shut him out of the game.

With an action shot like this, you know why he won easily.

The small but very vocal Greek Australian crowd backed Tsitsipas on the moments he required a lift not that much encouragement was required.

Meanwhile, Tennis Australia has listened to the crowds and to Nick and Thanasi, moving Nick Kyrgios and Thanasi Kokkinakis to Rod Laver Arena for the Australian Open doubles semi-final.

The boys in the post-interview yesterday told the Ceo of Tennis Australia Craig Tiley to keep them in the KIA arena which has a capacity of 5000 Tiley has done one better and upgraded them to Rod laver which holds 14,820 compared to Kia 5000 persons.

“We actually are going to move the Special Ks from Kia arena on to Rod Laver Arena,” Tiley said on Channel 9.

Kyrgios and Kokkinakis’ run to the final four has played out in front of a packed Kia Arena, which is available to any patron with a ground pass.

The crowd capacity also at the Australian Open will be increased by 15 per cent after Victoria’s chief health officer Brett Sutton agreed to the change.

Before the tournament began, the state government announced crowds would be capped at 50 per cent to be in line with the state’s current COVID-19 settings, with a density limit of one person per two square metres at Melbourne Park.

But on Wednesday, Sports Minister Martin Pakula tweeted that Brett Sutton had agreed to a slight increase in time for the finals.

After Djokovic, Tsitsipas hits out at ‘crazy’ Wimbledon tennis ban