The plane sent by Moscow to transport back to their country the Russian diplomats deported from Greece and Spain had to make huge detours due to the ban on Russian flights imposed by many European countries on their airspace.

According to FlightRadar, the plane traveled a total of 15,000 km to complete its mission.

“Plane sent from Moscow to collect expelled Russian diplomats from Spain, then Greece, was forced to make 15K detour because of EU flight ban—almost as long as world’s longest flight between Singapore and New York, according to flightradar24,” Wilson Center fellow Lucian Kim wrote on Twitter.

Plane sent from Moscow to collect expelled Russian diplomats from Spain, then Greece, was forced to make 15K detour because of EU flight ban—almost as long as world's longest flight between Singapore and New York, according to @flightradar24. https://t.co/lsQrF124pH pic.twitter.com/4gyN1Ihkrr

It is recalled that on April 6, the Greek Ministry of Foreign Affairs announced the deportation of 12 members of the Diplomatic and Consular Missions of Russia to Greece.

According to the relevant announcement, these Russian diplomats are characterised as persona non grate.

Flightradar24 wrote: “The total length of the flights was 15,163 km, just shy of the current world’s longest flight between Singapore and New York.” 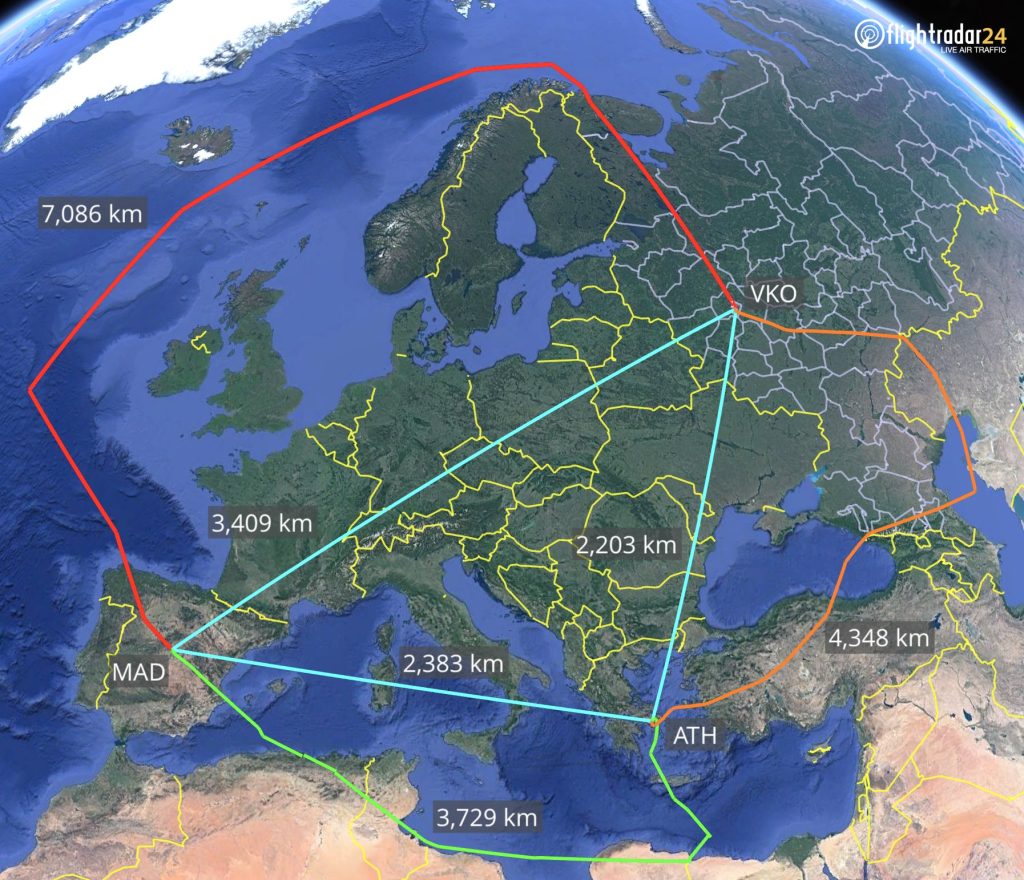 The first leg of the journey took the aircraft from Moscow to Spain the very long way around. The flight needed to remain in international airspace except for its entry into Spain, more than doubling the great circle distance between the two cities.

Departing Madrid, the Russian plane flew a direct course out of Spanish airspace and skirted North Africa and the Mediterranean coast, avoiding Maltese and Italian airspace. After crossing Libya in to Egypt, the flight turned north for an approach to Athens.

The flight home from Athens took the aircraft through mostly friendly airspace. Turkey has continued to allow Russian aircraft access, including commercial flights to Turkish destinations.

Once out of Turkish airspace the flight continued east, avoiding the area of Russian airspace near Ukraine that has been off limits to most flights since the Russian invasion began at the end of February.

Additional countries have stated that Russian diplomats either will or could be expelled, so it is possible that we’ll see even more circuitous flights by Russia.