On this day in 1970, Kostas Georgakis, a Greek student of geology, set himself ablaze in Matteotti Square in Genoa, Italy, as a protest against the dictatorial regime of Georgios Papadopoulos.

To a friend he had written:

"I am sure that sooner or later the people of Europe will understand that a fascist regime like the one based on Greek tanks is not only an insult to their dignity as free men but also a constant threat to Europe.... I do not want my action to be considered heroic as it is nothing more than a situation of no choice. On the other hand, maybe some people will awaken to see what times we live in."

Georgakis grew up in Corfu in a family of five. His father was a self-employed tailor of modest means. Both his father and grandfather distinguished themselves in the major wars that Greece fought in the 20th century.

He attended the second lyceum in Corfu where he excelled in his studies.

In August 1967, a few months after the 21 April coup in Greece, Georgakis went to Italy to study as a geologist in Genoa. He received 5,000 drachmas per month from his father and this, according to friends' testimony, made him feel guilty for the financial burden his family endured so that he could attend a university. In Italy he met Rosanna, an Italian girl of the same age and they got engaged.

In 1968 Georgakis became a member of the Center Union party of Georgios Papandreou.

In Genoa, he was attacked by members of the junta student movement. While in the third year of his studies and having passed the exams of the second semester Georgakis found himself in the difficult position of having his military exemption rescinded by the junta as well as his monthly stipend that he received from his family.

The junta retaliated for his involvement in the anti-junta resistance movement in Italy as a member of the Italian branch of PAK. His family in Corfu also sent him a letter describing the pressure that the regime was applying to them.

Fearing for his family in Greece, Georgakis decided that he had to make an act to raise awareness in the West about the political predicament of Greece. Once he made the decision to sacrifice his life, Georgakis filled a canister with gasoline, wrote a letter to his father and gave his fiancée Rosanna his windbreaker telling her to keep it because he would not need it any longer.

Around 1:00 a.m. on 19 September 1970, Georgakis drove his Fiat 500 to Matteotti square. According to eyewitness accounts by street cleaners working around the Palazzo Ducale there was a sudden bright flash of light in the area at around 3:00 am.

At first they did not realise that the flame was a burning man. Only when they approached closer did they see Georgakis burning and running while ablaze shouting, "Long Live Greece", "Down with the tyrants", "Down with the fascist colonels" and "I did it for my Greece."

The street cleaners added that at first Georgakis refused their help and ran away from them when they tried to extinguish the fire. They also said that the smell of burning flesh was something they would never forget and that Georgakis was one in a million.

According to an account by his father who went to Italy after the events, Georgakis's body was completely carbonised from the waist down up to a depth of at least three centimetres in his flesh. Georgakis died nine hours after the events in the square at around 12 noon the same day. His last words were: Long Live Free Greece.

The Municipality of Corfu has dedicated a memorial in his honour near his home in Corfu city. His sacrifice was later recognised and honoured by the new democratic Hellenic Government after metapolitefsi.

In his monument a plaque is inscribed with his words in Greek. The monument was created gratis by sculptor Dimitris Korres. 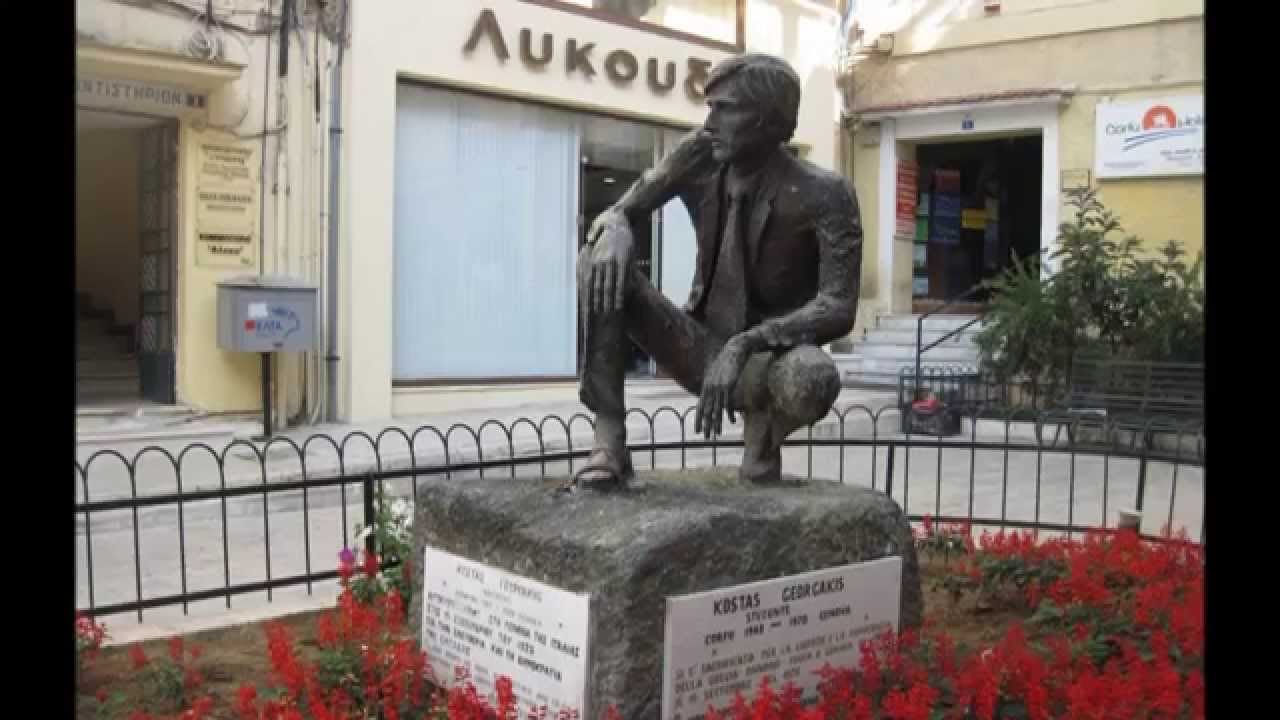 Poet Nikiforos Vrettakos in his poem "I Thea tou Kosmou" (The View of the World) wrote for Georgakis:

...you were the bright summary of our drama...in one and the same torch, the light of the resurrection and our mourning by the gravestone...

Poet Yannis Koutsoheras in his poem "Kostas Georgakis self-immolating in the square of Genoa" wrote: "Living Cross Burning and a cry urbi et orbi transcending this world: -Freedom to Greece".

On 18 September 2000 in a special all-night event at Matteotti square, Genoa honoured the memory of Georgakis.

In Matteotti square where he died, a plaque stands with the inscription in Italian: La Grecia Libera lo ricorderà per sempre (Free Greece will remember him forever). The complete inscription on the plaque reads:

which translates in English:

To the young Greek Konstantin Georgakis who sacrificed his 22 years for the Freedom and Democracy of his country. All Free Men shudder before his heroic gesture. Free Greece will remember him forever.

ELSTAT: Greece's trade balance with Russia is in a deficit of €1.04 billion