The Dutch journalist Igeborg Beugel, who accuses Greece of push back practices in the Aegean, reappeared - to speak once again about "expulsion of naked children", at a rally to demand Open Borders and legalisation papers for Pakistanis in Athens.

Beugel, who said in November - after the out roar she caused in a joint interview with Dutch Prime Minister Mark Rutte - that she was going to return to the Netherlands, took part in Sunday's demonstration in the Athens neighbourhood of Petralona. 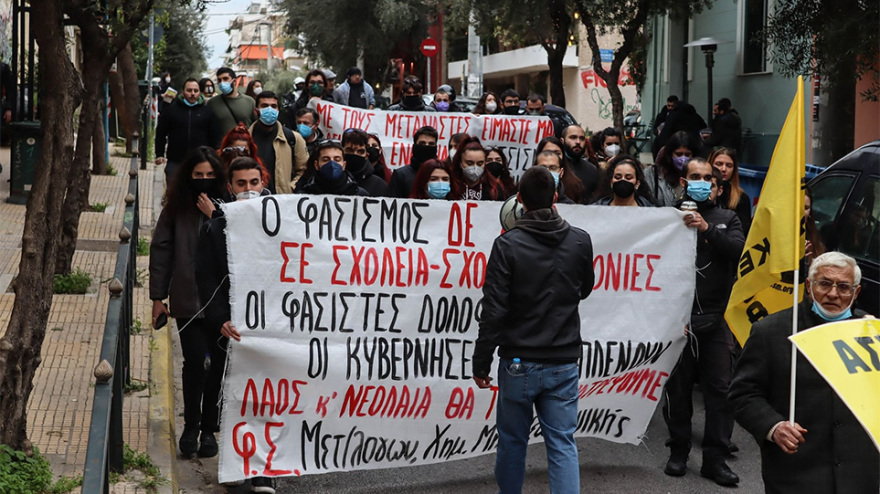 In her speech, the journalist spoke again about push back practices by the Greek authorities, "with the return of naked children to Turkey."

Beugel was arrested last June in Hydra, when it was found that she was hosting a young Pakistani who did not have a residence permit in Greece.

READ MORE: Who is the Dutch Journalist Who Took on Greek PM?

Speaking to Dutch media after she caused outrage in Greece, the Dutchwoman claimed she was attacked by a man when she went to a store wearing the same red hat.

The man allegedly called her a “Turkish spy” and a “wh*re” and threw a stone at her on her way home in Athens.

She added that she did not receive any protection from Greek authorities.

On the advice of the Ministry of Foreign Affairs and the Dutch embassy in Athens, Beugel decided to leave Greece as soon as possible and the Dutch Journalists’ Association provided assistance to her.

Having lived in Greece for the last 40 years, she said that she would like to return to Greece at some point, and it appears she finally has for this rally to open Greece's borders and provide legalisation papers to illegal immigrants.

Meanwhile, three Pakistani nationals were handcuffed by police in Paionia, Kilkis in Central Macedonia, following a report of a robbery against a group of Cuban immigrants, including a 25-year-old woman, who is also said to have been raped.

The arrested Pakistanis, aged 21 to 29, were taken to the Kilkis Prosecutor of First Instance and with the charges against them, they were referred to testify to the investigator.

Pakistanis in Greece are also disproportionately represented in sexual assaults committed in the country, which teenagers often the target.

It is recalled that late last year a Pakistani was found wandering in a central square in Kalivia with his pants down was arrested by police.

A 27-year-old girl saw him and informed the police.

She even said that the man was walking around half-naked in a place where small children were playing.

Pakistanis clash in the centre of Thessaloniki

Pro-Turkish Pakistani's raised a drone over the Greek parliament!

IOANNINA: Illegal immigrants show off their knives - One of them once served in the Pakistani army!