Greece will be affected by successive cold snaps in the coming week as a result of cold air masses moving south from the polar regions, according to forecasts issued by the National Observatory of Athens weather service METEO.

The first of these cold snaps, marked by low temperatures but clear skies, started on Sunday, while the cold is forecast to deepen slightly on Tuesday and Wednesday and be accompanied by rain and snow in parts of Evia and eastern mainland Greece.

An even colder wave is expected next Saturday, with a high chance of snow at even low altitudes.

According to the NOA, the reason for the persistent cold weather is due to a shift in the polar jet stream, a fast-flowing current of air circulating 10 kilometres above the surface of the Earth that moves from west to east.

In recent days, the polar jet stream that moves from Canada to Europe has been pushed northward from its average climatic position in the region of Western Europe.

This has resulted in the development of a region of high pressure in Central and Western Europe, bringing warmer and drier weather.

To the east, however, in Scandinavia and western Russia, the jet stream turns south and carries colder air masses southward.

Meanwhile, local rains and snowfalls in the mountains of the eastern and southern country occurred on Wednesday.

The highest precipitation height was recorded at the meteorological station in Setta, Evia in the form of snow and was 23 mm.

The table below shows the 8 stations with the highest precipitation height until 20:00 on Wednesday. 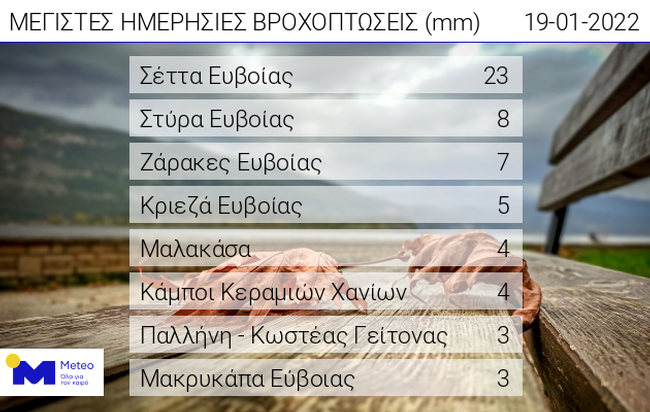