New provocations against Greece were made by Turkish Defence Minister Hulusi Akar, with an indirect attacks on Foreign Minister Nikos Dendias over his recent statements urging Ankara not to try to exploit the conflict in Ukraine for its own agenda.

In his statements, Akar accused Greece, and especially some of its politicians, of “aggressive rhetoric” that “escalates the tension” between the two countries, presenting once again the events according to Turkish logic and methods. 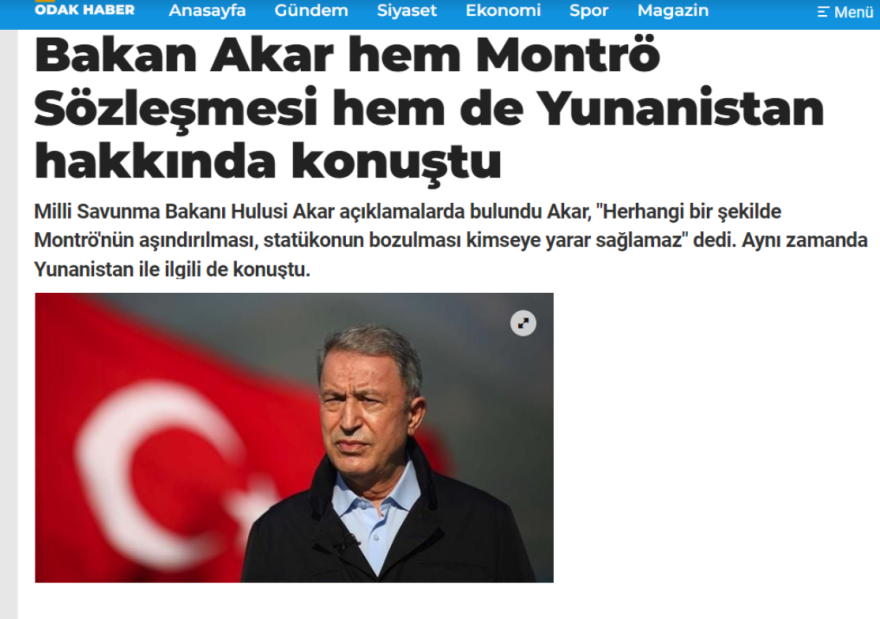 “Although we are always in favor of goodwill talks, dialogue, peaceful ways and methods, our neighbouring country Greece, and especially some politicians, continue their anti-Turkish rhetoric, deliberately distorting specific events and then escalating the tension with aggressive rhetoric,” Akar said.

“They even try to use the events in Ukraine as an element of attack against Turkey,” he continued.

“Everyone sees that this situation is not good, in the context of good neighbourly relations, and that what is being done – despite our well-intentioned calls in the context of the NATO alliance – is extremely wrong,” the Turkish Minister of Defence said.

Akar once again supported the “talks” with Greece, asking Athens to sit at the negotiating table, according to the agenda -obviously- that the Turkish side wants.

He also invited a Greek delegation to Ankara for talks, stressing that Turkey continues to carry out “successfully” its illegal and provocative activity in the Aegean, the Eastern Mediterranean and Cyprus.

“We continue to maintain our stubbornness,” Akar said.

“At every opportunity we call on Greece, which avoids dialogue and meetings, in dialogue, at the table,” he said, adding: “We are waiting for the delegation of the Greek Ministry of Defence in Ankara for the 4th meeting of Confidence Building Measures.”

“The Turkish Armed Forces continue to successfully operate in the Aegean, the Eastern Mediterranean and Cyprus,” the minister added.

Ukraine's Greek village of Sartana: The persecutions, the war and the thirst for Greek education (PHOTOS)