Alexander the Great is one of the most extraordinary individuals in history. He became king of the fringe Greek kingdom of Macedonia in 336 BC at the age of just 20, and before his death twelve years later, had imposed Macedonian overlordship on Greece, destroyed the mighty Persian Empire and led an army deep into modern Afghanistan and to the Indian frontier.

At Opis he faced a mutiny by his Macedonian troops, angered that he wanted to send some of them home, while appearing to give preference to his new Asian subjects, and adopting many of their customs. Alexander dealt ruthlessly with the ringleaders, before (according to 'The Anabasis' by Roman historian Arrian) making a speech to his army in which he berated his troops for their disloyalty.

The speech, as it has reached us, was no doubt written by Arrian rather than Alexander. His actual words are now impossible to ascertain.

But Arrian had access to eyewitness accounts which are now lost (principally Ptolemy and Nearchus), and modern historians generally agree that the speech was a real historical event, and that Arrian gives a good representation of its likely content. 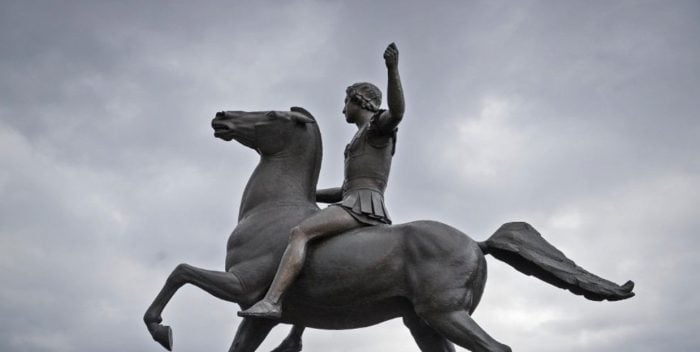 Putting its (contested and debated) value as a historical source to one side, the scene - as it appears in Arrian - is a brilliantly written moment of high drama and emotion, in which Alexander first highlights his debt to his father Philip, before launching into a tirade in which he lists his own astounding achievements and qualities of leadership.

The speech has been abridged for this video.

"The speech which I am about to deliver will not be for the purpose of checking your start homeward, for, so far as I am concerned, you may depart wherever you wish; but because I wish you to know what kind of men you were originally and how you have been transformed since you came into our service.

"In the first place, as is reasonable, I shall begin my speech from my father Philip. For he found you vagabonds and destitute of means, most of you clad in hides, feeding a few sheep up the mountain sides, for the protection of which you had to fight with small success against Illyrians, Triballians, and the border Thracians.

"Instead of the hides he gave you cloaks to wear, and from the mountains he led you down into the plains, and made you capable of fighting the neighbouring barbarians, so that you were no longer compelled to preserve yourselves by trusting rather to the inaccessible strongholds than to your own valour. He made you colonists of cities, which he adorned with useful laws and customs; and from being slaves and subjects, he made you rulers over those very barbarians by whom you yourselves, as well as your property, were previously liable to be plundered and ravaged.

"He also added the greater part of Thrace to Macedonia, and by seizing the most conveniently situated places on the sea-coast, he spread abundance over the land from commerce, and made the working of the mines a secure employment. He made you rulers over the Thessalians, of whom you had formerly been in mortal fear; and by humbling the nation of the Phocians, he rendered the avenue into Greece broad and easy for you, instead of being narrow and difficult.

"The Athenians and Thebans, who were always lying in wait to attack Macedonia, he humbled to such a degree,—I also then rendering him my personal aid in the campaign,—that instead of paying tribute to the former and being vassals to the latter, those States in their turn procure security to themselves by our assistance.

"He penetrated into the Peloponnese, and after regulating its affairs, was publicly declared commander-in-chief of all the rest of Greece in the expedition against the Persian, adding this glory not more to himself than to the commonwealth of the Macedonians. These were the advantages which accrued to you from my father Philip; great indeed if looked at by themselves, but small if compared with those you have obtained from me.

"For though I inherited from my father only a few gold and silver goblets, and there were not even sixty talents in the treasury, and though I found myself charged with a debt of 5OO talents owing by Philip, and I was obliged myself to borrow 800 talents in addition to these, I started from the country which could not decently support you, and forthwith laid open to you the passage of the Hellespont, though at that time the Persians held the sovereignty of the sea.

"Having overpowered the viceroys of Darius with my cavalry, I added to your empire the whole of Ionia, the whole of Aeolis, both Phrygias and Lydia, and I took Miletus by siege. All the other places I gained by voluntary surrender, and I granted you the privilege of appropriating the wealth found in them.

"The riches of Egypt and Cyrene, which I acquired without fighting a battle, have come to you. Coele-Syria, Palestine, and Mesopotamia are your property. Babylon, Bactra, and Susa are yours. The wealth of the Lydians, the treasures of the Persians, and the riches of the Indians are yours; and so is the External Sea.

"You are viceroys, you are generals, you are captains. What then have I reserved to myself after all these labours, except this purple robe and this diadem?

"I have appropriated nothing myself, nor can any one point out my treasures, except these possessions of yours or the things which I am guarding on your behalf.

"Individually, however, I have no motive to guard them, since I feed on the same fare as you do, and I take only the same amount of sleep. Nay, I do not think that my fare is as good as that of those among you who live luxuriously; and I know that I often sit up at night to watch for you, that you may be able to sleep."

READ MORE: From Egypt To India: The Cities Founded By Alexander The Great.